The Return to Campus website has updates about WVU's spring semester. Visit coronavirus.wvu.edu and CDC.gov for health resources related to the global pandemic. 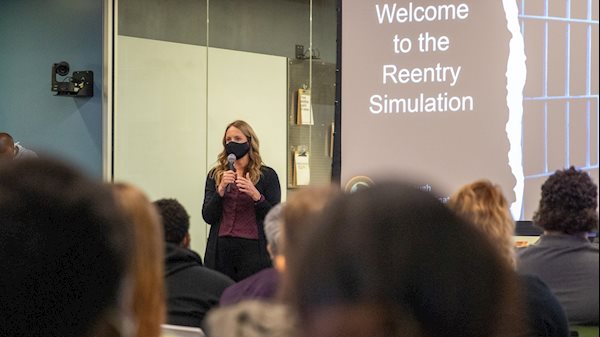 The United States has one of the highest recidivism rates in the world, with more than 75% of prisoners being rearrested within five years of release. This was a fact shared by Ashley Lough on Tuesday evening during a Reentry Simulation event, sponsored by the WVU Honors College and Honors College Living-Learning Community, WVU School of Public Health and the WVU Reed College of Media Martin Hall Agency.

Lough, the prevention and reentry coordinator for the Northern West Virginia District of the U.S. Attorney’s Office, led the reentry simulation for WVU students from nearly a dozen units on campus, ranging from Public Health and Social Work to Media and Political Science to Law and Criminology. Each attendee was given a packet that included a “Life Card” which listed living expenses and court ordered appointments, varying amounts of money, transportation tickets and cards signifying possessions and their worth.

Read the full story from the WVU Reed College of Media.

View photos from the event.