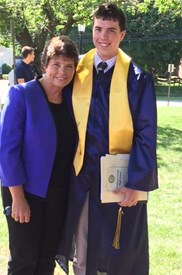 Nearly a year ago, I sat where each of you recently has – in a chair at my son’s high school graduation, my face beaming with pride as he walked across the stage to accept his diploma. On the inside, I was a nervous wreck as to how drastically my son’s life – and my life as his mother – was going to change in the following months as he headed off to college at West Virginia University, across countless mountains and some three hours away. Would he be happy? Would my quiet, reserved son make friends? Would he excel academically? Would he opt to skip class and instead ride the really cool PRT from campus to campus, over and over, day after day? Would he eat anything besides Chick-Fil-A? Would he ever vacuum and dust his room? Or worse yet, forget his turn to clean the shared bathroom? Would he ever call his Mom?

Like many of you, my son and I attended as many events as we could at WVU to learn more about the university and the School of Public Health, as well as college life in general. I must admit that the thought of sending my firstborn off to study at such a huge university was a daunting one – and particularly so when the Public Health program had only been around for such a short time. At each meeting with the staff and current students in the Public Health program, we quickly saw how each person could hardly contain their excitement about the program and about attending WVU as a whole. In addition, Professor Hunt, assistant dean for the undergraduate program at the school, was very reassuring in explaining that because the School of Public Health was such a small school within a bigger university, that it allowed them to work more closely with and develop closer relationships with their students. 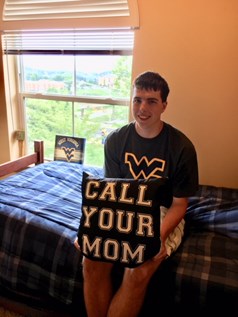 When this Mom teared up during my son’s final planning meeting at WVU prior to the start of his freshman year, it was Lauren Devine, director of admissions and recruitment, who swept in and gave me a reassuring hug. That simple hug spoke volumes. I knew at that moment that I was sending my son off to a place where he would genuinely be cared about – he wouldn’t be “just another student.”

That same son that I was so desperately worried about very successfully finished his freshman year attending the Honors College at West Virginia University and the School of Public Health –a place that he has found to be a perfect “home away from home” for him. Nearly all of my fears were unfounded – well except for the one about dusting and vacuuming his room – yikes! An allergy pill was necessary at move-out!

For those of you on the fence about WVU, I encourage you to reach out to the staff. They have always been quick to answer any emails or phone calls. They genuinely care. The current students are also a tremendous source of information – they “tell it like it is.” They are able to speak to your student in a way that the information doesn’t go in one ear and out the other – the information sticks with them! The input offered by several of the current Public Health students played a large part in my son deciding to attend WVU. And speak with parents of current students. Although we may not have all of the answers, we certainly would do our best to help you in this stressful decision-making time. We’ve “been there, done that” and are happy to help as we are able. 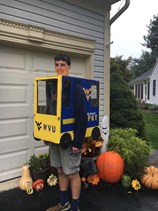 In closing, I hope that my thoughts have helped to illustrate to you what a wonderful school WVU is and particularly the School of Public Health. Soon, my son will be starting his sophomore year, and this year, unlike last year, I have absolutely no fears in sending him down those “Country Roads” to the “place where he belongs.” (WARNING: You’ll soon find yourself humming John Denver’s famous song over and over and over.)

Perhaps you’ll come across my son Ryan in the next few months. He was so impacted by the Student Ambassadors that met with us during our decision-making days that he has decided he wants to equally impact the lives of those he hopes will become future Mountaineers by being a Student Ambassador himself.

Did you have a positive experience as you visited WVU and prepared your student for their journey as a Mountaineer? Tell us about it! Email Lauren Devine.