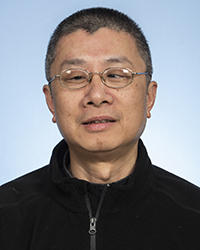 Sijin Wen is an Associate Professor in the Department of Biostatistics in the School of Public Health at West Virginia University, with a joint appointment in the Mary Babb Randolph Cancer Center. Dr. Wen received his PhD in Biostatistics at The University of Texas Health Science Center in Houston (2009). He previously was a Principal Statistical Analyst at MD Anderson Cancer Center from 2001- 2012, and had served as a biostatistician on several NIH/NCI funded grants such as NCI Specialized Program of Research Excellence (SPORE) in prostate cancer and genitourinary cancer, respectively. Dr. Wen participates in the design and analysis of numerous clinical trials, laboratory experiments and observational studies. He has extensive skills with simulations for clinical trial designs. Much of his work has been computer-intensive and draws heavily on Markov Chain Monte Carlo (MCMC) algorithms for inference.

Most of the research that Dr. Wen is engaged in is motivated by cancer research. His research interests include adaptive designs, interim analysis on efficacy and toxicity in clinical trials for cancer patients, multiple disease recurrences, multivariate survival analysis, and various applied statistical problems. In addition, Dr. Wen is interested in analyzing gene expression data from microarrays, protein arrays or tissue arrays, using clustering algorithms and statistical modeling. He has implemented algorithms and tools for analyzing high-throughput data sets. These analyses identify sets of genes that can be used to distinguish features between normal tissue versus cancer; different types or stages of cancer; or treated versus untreated cancer cells.